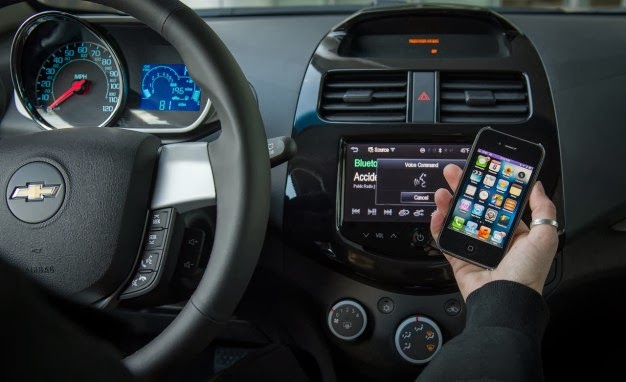 BAY CITY, Mich.- With the automaker's latest announcement, Chevrolet is making staying connected even easier and safer for drivers and passengers. Announced earlier this week, Chevrolet is expanding Siri Eyes Free Integration to 2014 models, including the 2014 Camaro, Cruze, Equinox, Malibu, SS, and Volt!

Siri Eyes Free Integration was first implemented in the Chevy Sonic and Spark, and after a positive response from consumers, the automaker has announced it will expand the technology to more 2014 models! Many drivers are now familiar with in-car infotainment systems, and the new Siri Integration compliments Chevrolet's MyLink capabilities perfectly.

Similar to how iPhone users interact with Siri outside of the car, Chevy's Siri Integration allows compatible iPhone users to use their voice to direct Siri to perform various tasks through the Chevrolet MyLink infotainment system. And to minimize distraction even further, the Siri Eyes Free mode prevents the phone's screen from lighting up. So, users can use their voice to interact with their phone without being distracted by their phone lighting up.

To use Siri Eyes Free in your 2014 Chevy vehicle, all you have to do is pair your iPhone via Bluetooth with the MyLink system and then use the voice activation controls on the steering wheel to interact with Siri. With the new technology, drivers can make voice-activated, hands-free calls; play songs and control music sources from iTunes/AM/FM/XM; listen to, compose, and send text messages; and access calendars to add appointments.

Chevrolet is expanding Siri Eyes Free Integration to 2014 models including the Camaro, Cruze, Equinox, Malibu, SS, and Volt. To experience for yourself how the new technology works, stop by Hank Graff Chevy! We are located at 3636 Wilder Road, Bay City, MI 48706. For more information on Hank Graff Chevrolet, or for any questions call us at (989) 684-4411 or visit our websites: www.GraffBayCity.com.