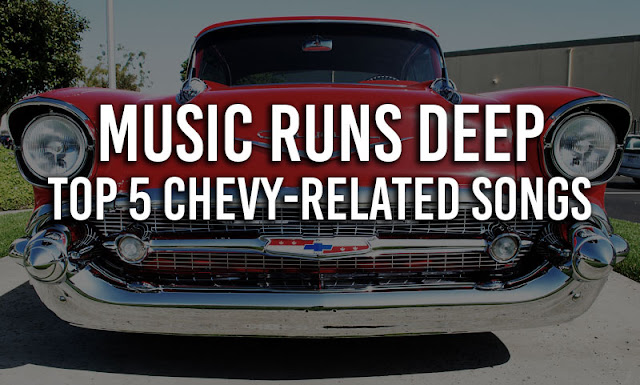 BAY CITY, Mich. -- Cars are no doubt a popular subject in music, but you'd be hard pressed to find another name that's been dropped more than Chevrolet. In fact, Bill Ludwig, CEO of Campbell-Ewald - the agency that handled the brand for 91 years - reported in 2006 that there were a whopping 545 songs written about Chevy. By 2011, there were over 700.

On top of that, the brand has historically incorporated the work of popular artists in their ad campaigns, dating back to the 1950s when Dinah Shore encouraged Americans to "See the USA in Your Chevrolet". Others include Bob Seger, whose "Like a Rock" headlined a hugely successful campaign for Chevy trucks in the 90s; as well as John Mellencamp, whose "Our Country" inspired an emotionally patriotic plug for the Silverado.

So without further ado, here are our Top 5 Favorite Chevy-Related Songs! Enjoy!


Let's head back to those heady days of rock n' roll, blue jeans, and old gold Chevys. Do you remember? This is a tune perfect for the airy summertime cruises we're so fond of here in the Mitten, and really captures the Americana spirit in which Chevy is firmly rooted. In fact, Elton John drew heavy inspiration from Bill Haley and the Comets, the group responsible for one of the most iconic songs associated with the era: "Rock Around the Clock".


Perhaps the most famous Chevy-related song out there, Don McLean's epic ballad is the longest song to enter the Billboard Hot 100, and the longest to hold the number one spot. While the meaning behind the lyrics has long been debated, one of the most popular theories is the "loss of innocence" amongst the early rock n' roll generation, citing McLean's strong references to the tragically sudden loss of three era icons: Buddy Holly, The Big Bopper, and Ritchie Valens - widely considered "The Day the Music Died".

On a more positive note, you could also say that "American Pie" is something of a tender love letter to the glory days of classic America. A revolutionary time when McLean and his contemporaries shed the antiquated values of their elders in favor of a more free-spirited, bold, and authentic culture - sentiments that Chevy shares strongly.


It doesn't get more blatant than this offering from music's most famous beards. The song tells the story of an easy-riding road trip through the American Southwest - just a dude, his Chevy, and the open road. The "flat forty-one" that the narrator mentions is the 1941 Chevrolet Series AK pickup truck. Knowing that their trucks might soon be rolling into WWII, Chevy was pressed to design a stronger, more versatile pickup. The result was the Series AK, which marked a shift in appearance from the "car-like" models they previously produced to those that distinctively looked, handled, and held-up like the burly Chevy trucks we know and love today.


While sharing your life with someone you really dig is exciting, it's important that through it all you remain true to who you are. Furthermore, your partner should accept it. That's why they fell for you anyway, right? Eric Clapton melodizes this sentiment of personal authenticity with smooth vocals and even smoother licks - putting it plainly that if you wanna be his lover, you gotta take him as he is. We feel you on that '57 Chevy though, Eric. *swoon*


Despite limited commercial success in their two-decade career, the Ramones are the veritable godfathers of punk rock - widely considered to be the first band to truly define the sound and heavily influencing countless acts after them both in the United States and the UK. This quick little number is just as fast as the legendary Camaro - and definitely just as fun.