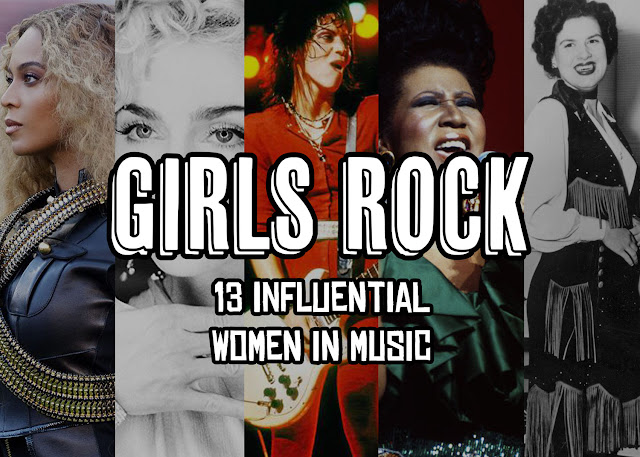 BAY CITY, Mich. -- Whether it's originating an entire genre, carving a path for other women in fiercely masculine territories, or using their fame as a platform to drive change throughout the world; these girls truly rock. In honor of National Women's History Month, us music lovers here at Graff Bay City would like to share with you some of the most influential female artists in music history!


1. BEYONCE
Kicking off our playlist is the one and only Queen B. While she describes herself as a "modern-day feminist", she stresses that, by definition, the concept is not exclusive to women, nor does it equate to female superiority. Rather, it is the belief in equal rights for men and women, and this is the message that she resolves to express through both her music and activism.

2. JANIS JOPLIN
While her time here was tragically short, Janis Joplin's impact on the world of rock n' roll is indisputable; widely regarded as paving the way for numerous female rockers after her. A free yet troubled spirit with a natural gift for performance, Joplin's onstage presence was described as "electric" by her fans and fellow musicians alike. As Stevie Nicks put it: "Janis put herself out there completely, and her voice was not only strong and soulful, it was painfully and beautifully real. She sang in the great tradition of the rhythm & blues singers that were her heroes, but she brought her own dangerous, sexy rock & roll edge to every single song. She really gave you a piece of her heart."

3. ARETHA FRANKLIN
The late, great Aretha Franklin not only holds the distinction as the "Queen of Soul", but is also arguably the originator of the genre itself as well as the first female inductee to the Rock N' Roll Hall of Fame. One of her most beloved hits, "Respect", was actually written and released by Otis Redding originally; but its the difference in the message that made Franklin's version a long-time feminist anthem. In Redding's version, the narrator is a desperate man who will give the woman in his life anything she wants, regardless of how she treats him, just as long as he gets his due respect as the breadwinner. In Franklin's version, the narrator is a strong, confident woman who is well aware that she has everything her man wants, and she demands that he give her the equal respect she gives him.

4. PATSY CLINE
The short-lived yet immensely impactful career of Patsy Cline transformed the influence of women in the largely male-dominated world of country music. After a decade long balancing act of helping support her family and grinding on the local country music circuit in her native Virginia, Cline got her big break on Arthur Godfrey's Talent Scouts on CBS with the hit "Walking After Midnight". Her professional life was a series of firsts for a woman in her genre including induction to the Country Music Hall of Fame, headlining her own show, and performing on Nashville's biggest and most coveted stage: the Grand Ole Opry. Throughout her career, Cline was well-known for her staunch empowerment of other females in country music, believing that there was "room enough for everybody", as well as her shrewd business acumen and no-nonsense attitude that enabled her to deal with the toughest power players in the Nashville scene.

5. MADONNA
Hailing from our very own Bay City, Madonna is widely credited as an early voice of feminism in music; with revolutionary imagery and lyrics that helped to revitalize the discussion of the concept within the United States. While her hit song, "Material Girl", is commonly taken literally as valuing wealth over love, it is actually written from the perspective of a powerful woman with her pick of anyone she wants - championing values of female self-reliance and determination that were largely unheard of in pop culture even in 1985 when the song was released.

6. MISSY ELLIOT
Hip-hop has historically been a boys club. That is until Missy Elliot exploded on the scene in 1997, and helped to pave the way for future female rappers in a genre notorious for its oftentimes misogynistic image and lyrical content. Throughout her career, Missy's extensive musical catalog has included themes of feminism, gender equality, and body positivity; in addition to defying the typical "hip hop girl" appearance in favor of a style more closely resembling that of her male contemporaries.

7. LADY GAGA
The incomparable Lady Gaga is difficult to fit in just one box, and that affinity for constant self-reinvention and theatrical mastery is what makes her an artistic and pop culture icon. Since catapulting into stardom in 2008, she is regarded across the globe as one of her generation's most exciting and talented entertainers and is also known for her tireless activism for various causes including LGBTQ+ rights, anti-bullying initiatives, and much more.

8. BILLIE HOLIDAY
If you ask any jazz singer today to list their top influences, there's more than a chance that Lady Day is among them. With her lilting voice and limited range of just over an octave, Billie Holiday brought a unique slow style and raw emotional honesty that added a soulful edge to genre staples. In addition, she also wrote many of the songs in her repertoire, including "God Bless the Child" and "Don't Explain", at a time when it was unusual for a woman to do so. Another first in her day as a female songwriter was her courage to make political statements through her music, most notably "Strange Fruit", a haunting tune that speaks to the racially-charged violence in the South at the time, arguably making Holiday an early voice of civil rights.

9. CHER
Recognized as one of the best-selling artists of all time and the only one in history to have a No. 1 single in every decade since the 1960s, Cher's distinction as music royalty is indisputable. However, she's never been one to rest on her laurels, having been an innovator since day one, even pioneering the use of auto-tune (later known as the "Cher effect") with her song "Believe". She's also made an immeasurable impact on the fashion world as well with her daring, flamboyant style, in addition to being an outspoken advocate of veterans rights, anti-poverty initiatives, vulnerable children, and improved quality of life for patients.

10. SELENA
Regarded as the "Queen of Tejano Music", Selena's contributions to music have immortalized her as not only one of the most prolific entertainers in history but also as a pioneer who arguably blazed the trail for Latinas in mainstream music. In addition to natural vocal talent characterized by perfect pitch and timing, Selena's radiant personality and interactive presence endeared her to every audience she stood before, and her keen eye for aesthetic lent itself to her on-stage costumes - all of which she designed herself.

11. JOAN JETT
The original "riot grrl" and founding member of the female revolution in punk rock, Joan Jett remains as fearless and defiant today as she was when performing with the Runaways at the tender age of 15. As a woman in such an aggressively masculine genre, Jett's come-up was one faced by both outright prejudice and brush-offs, but she quickly proved herself a force to be reckoned not only through fierce performing ability and musical talent, but also an uncompromising attitude that's made her a feminist icon in rock n' roll, and earned her the much due respect of the guys.

12. BJÖRK
Hailing from the tiny country of Iceland, the eccentric and multifaceted Björk might be a little too out there for some, but her impact on music and the art world at large is undeniable. If you have the time to run the gauntlet of her ten-record discography, you'll hear for yourself just what makes Björk so exciting, each one being as artistically adventurous and ever-evolving as she, yet always hitting the mark and never sounding out of their element.

13. SPICE GIRLS
Now 25 years after their meteoric rise to stardom, the Spice Girls are still breaking records, with their debut album still holding the distinction of being the most successful by a female group in music history. More than that, they played an important role in the lives of countless young girls throughout the 1990s, championing the notion of "girl power" and strong messages of gender equality in their lyrics.